The search for novel ways to explore and understand the functions of insoluble/physical cues on the behaviors of stem cells is vital in the areas of regenerative medicine, as these microenvironmental signals significantly affect the behaviors of cells, including stem cell adhesion, growth, migration, and differentiation. Several approaches have been examined over the past few years to comprehend these phenomena, and one of these approaches is the micro or nano-scale assembly of ECM proteins like laminin and fibronectin.

This project area focuses on achieving two main goals: One is to develop bio-surface chemistry methods to generate combinatorial arrays of microenvironmental molecules. The other is to utilize the platform to understand the temporal/spatial effects of the microenvironmental cues on growth, migration and differentiation of stem cells. Particularly, our group’s major research is focused on the lineage-specific differentiation of neural stem cells (NSCs) using combinatorial arrays of various microcuenvironmental cues. The implications of the results from this project could be potentially significant for tissue engineering for brain and spinal cord injuries, where NSCs or NSC-based differentiated cells can be transplanted into the damaged regions using scaffolds. 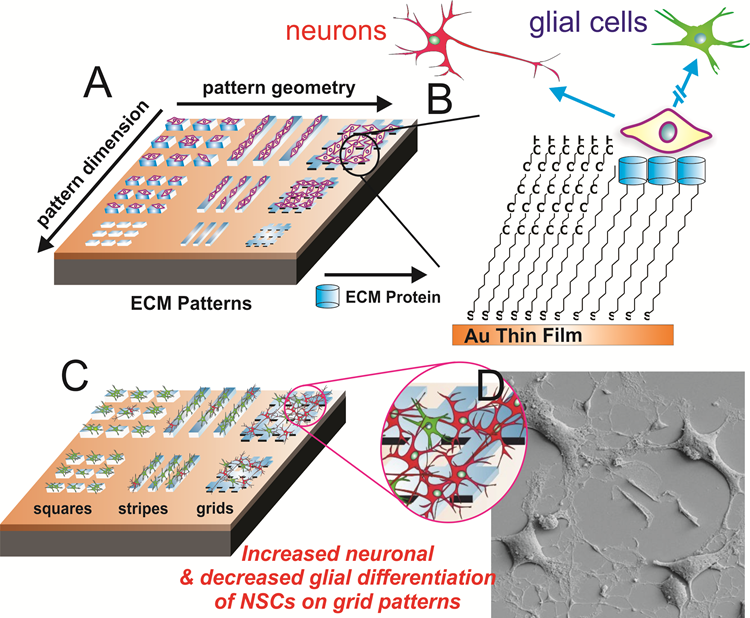 The fabrication of ECM protein patterns and their application for neural stem cell differentiation into either neurons (red) or astrocytes (green). Small, 2010

Key Publications from our group: